When using the heat shrink wrap, do you often encounter such problems: the product is not sealed tightly, and the sealing is continuous, so you can only rush to find an engineer or after-sales service to solve it? When we encounter such a problem, don't panic, AUSIM will teach you how to solve it. 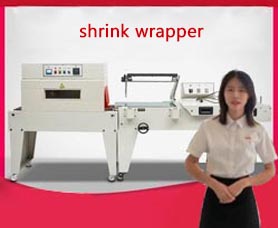 There are three reasons for improper sealing:

①The sealing part of the packaging bag cannot be sealed;

②Under the pressure of the sealing knife, although the mouth of the bag is sealed, but a little harder squeezing or tearing, the sealing will crack again;

③During the peeling test of the sealing part, half of the sealing is firm and the other half is separated. The quality of the sealing of such a packaging bag is still unqualified, because the contents are easily leaked out by squeezing during storage and transportation. This situation often occurs when the composite lining is OPP and blow-molded PE.

The reasons for the first situation are:

1 The sealing and cutting temperature is not enough, the temperature needs to be adjusted according to the thickness of the film

2 The hot-air cutting speed is too fast. If the speed is too fast, the sealing part will be transported to the heat shrink wrap for shrinking before it can be heated in the future. Naturally, it will not meet the heat-sealing quality requirements.

3 There is a problem with the quality of the heat-sealed film. A good film cuts out a thin and tight mouth. If the corona treatment of the composite lining is uneven, the effect is not good, and it happens to appear at the sealing place, it will definitely not be able to seal. If there is moisture in the seal, dirt will also cause the seal to not be tight. In the face of weak sealing, you need to increase the heat-sealing temperature appropriately, then reduce the heat-sealing speed, and increase the pressure of the cold presser foot at the same time. For the second case, the solution is to re-calibrate the position of the middle screw to make it level. If the upper and lower heat-sealing knives are unbalanced, it must be achieved by adjusting the pressure spring, and it can be adjusted to a moderate value. When the spring is retracted outward, the heat-sealing knife will fall downward; when the spring of the lower blade is tightened upward, the heat-sealing knife will move upward.

When the third situation occurs, it is mainly because:

(2) The surface of the heat shrink wrap knife is not flat enough. The first solution is that the adjustments on the hot-sealing knife or cold-pressing knife can be completely consistent;

The second is to re-calibrate the position of the middle screw to make it level. After self-diagnosis in this way, if the sealing and cutting effect is still not satisfactory, it is not too late to find an engineer. Of course, you can also choose the heat shrink wrap of AUSIM machinery. The sealing knife adopts the American DuPont Teflon coating anti-sticking and high-temperature aluminum alloy knife. The sealing does not crack, coking, smoke, and pollution. It is widely used in many industries. , And won unanimous praise from customers.